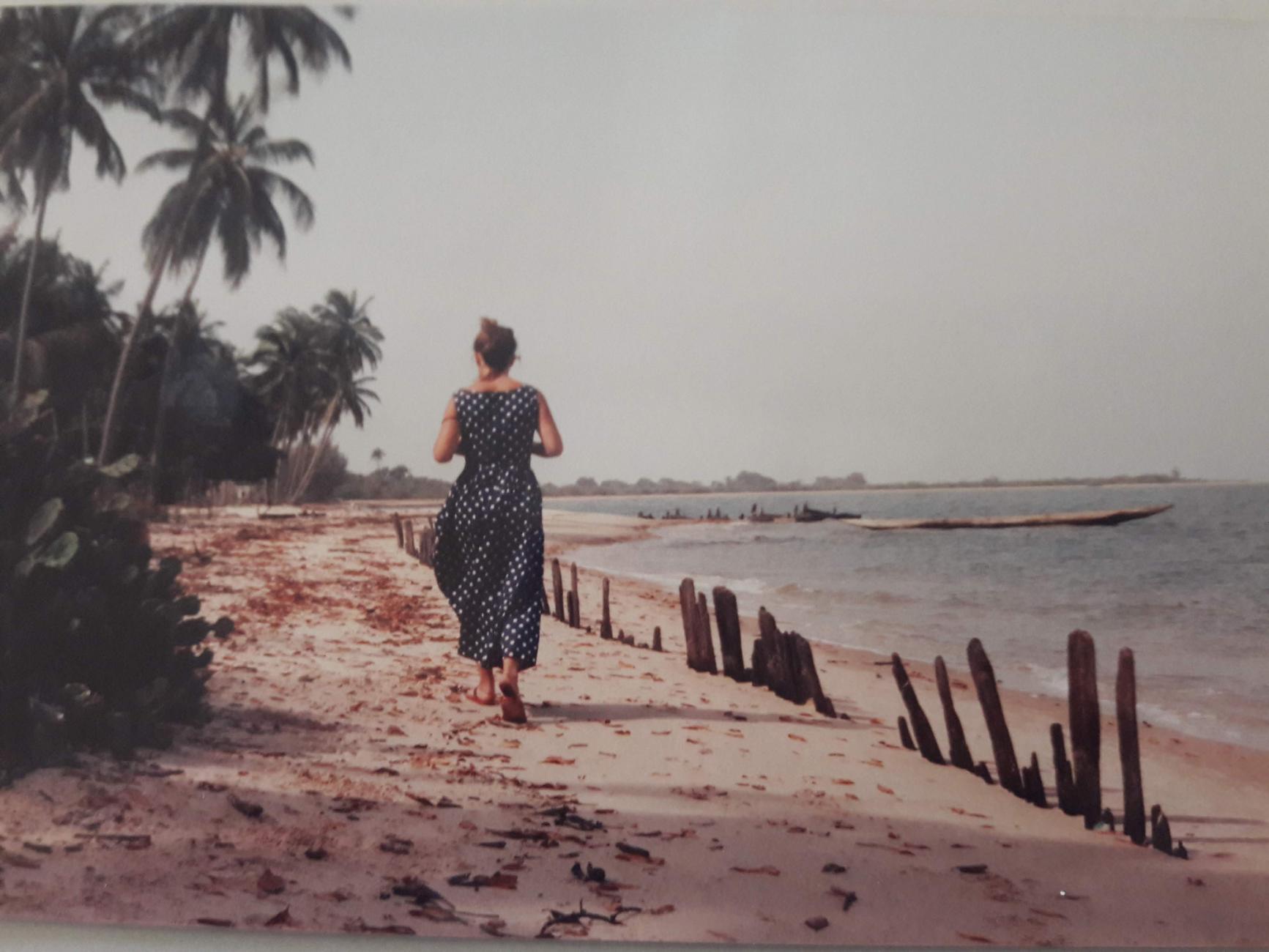 Emily Lynn Osborn enjoying a beach stroll on the island of Karabane, just off the coast of Senegal, during a trip to Casamance during the 1992–93 academic year. (All photos courtesy Emily Lynn Osborn)

An American in Dakar

Before historian Emily Lynn Osborn led study abroad trips, she took one of her own.

Twenty-five years earlier, as a junior majoring in history at the University of California, Berkeley, Osborn had her own study abroad experience in Dakar.

Osborn spent a year at the Université Cheikh Anta Diop, Senegal’s flagship university, living in a communal home with other study abroad students. “The dormitories on campus were overcrowded, as they are to this day, and university officials rightfully wanted to guard that precious real estate for their permanent students,” she says. There were so many strikes at the university that year, it was nearly considered an année blanche, a year off.

Nonetheless Osborn became highly proficient in Wolof and learned about life in a West African city. “I did a fair bit of traveling,” she says, “visited the families and homes of Senegalese friends, and ate lots of Senegalese food, such as yassa and cebb u jenn.” She got to know the owner of the local boutique, or corner store, and sometimes helped out behind the counter—another experience that “was great for my Wolof.” 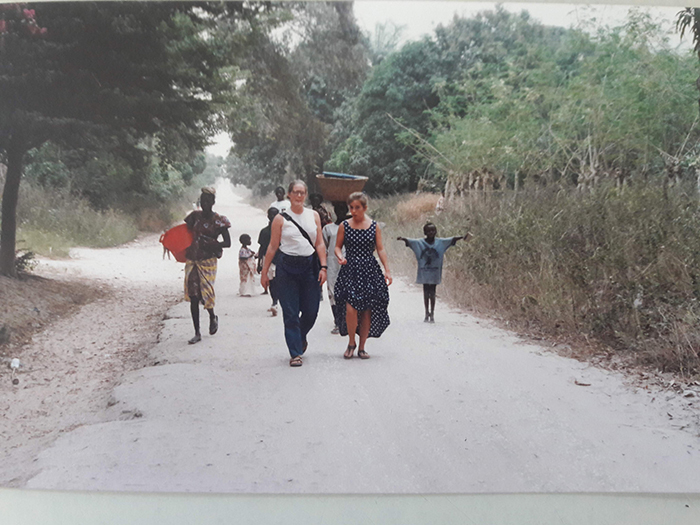 Above, Osborn (right) is traveling in Casamance, in southern Senegal, with a fellow student. “We would stay one or two nights in a campement, very basic lodgings that offered simple beds, a bucket bath, and a kerosene lantern or candles.” On arrival, the first thing to do was order dinner, “since whoever was cooking would need to go out and buy the fresh fish or chicken we would eat that evening,” she says.

“We stayed at places that could not be reached by vehicles but only by boat or foot. We traveled incredibly lightly. I had a small backpack, and we each developed various systems to ensure efficient use of space, clothing, and other necessities.” 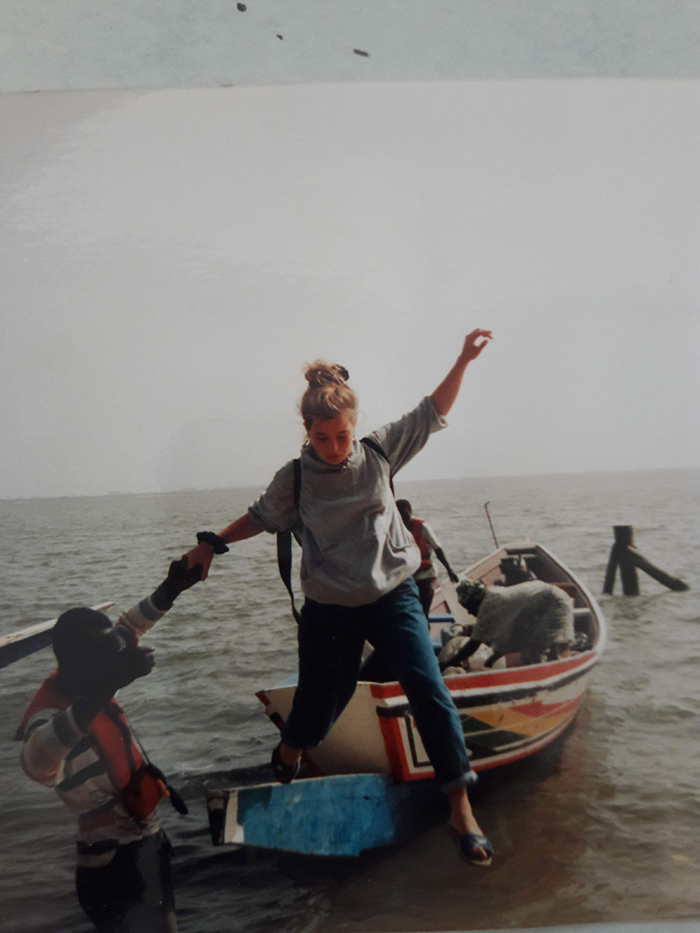 On the same trip to Casamance, “we took a boat down to Ziguinchor, the capital of the region, but we got off early, to stay on an island off the coast,” Osborn says. “The boat we were on from Dakar anchored briefly near the island, and then fishing canoes like this one [above] approached. We joined other people who climbed down a rope ladder into these vessels.” 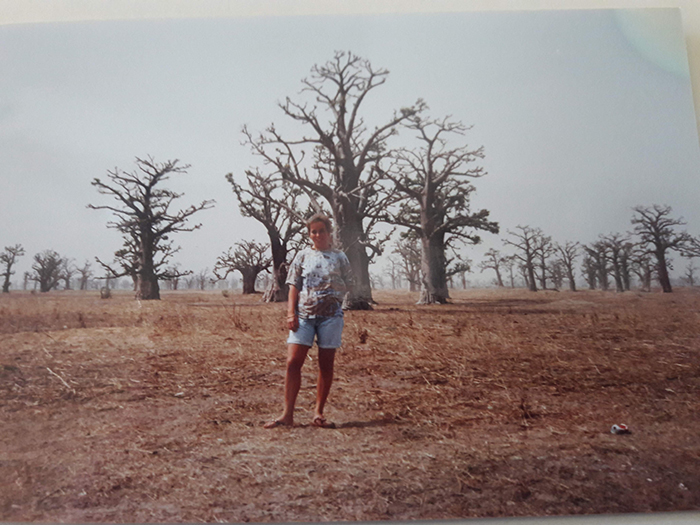 Here, Osborn is on a trip to the Gambia, a tiny country almost completely surrounded by Senegal. “These are baobab trees, which are everywhere in this part of West Africa,” she says. “They are towering and regal, and can sometimes achieve enormous size. For those who have ever read The Little Prince, by Antoine de Saint-Exupéry, baobab trees figure into that story. Saint-Exupéry spent time as a pilot in Senegal working for the postal service.”

Since these photos were taken, Osborn earned a PhD from Stanford University and published two books, Intermediaries, Interpreters, and Clerks: African Employees in the Making of Colonial Africa (University of Wisconsin Press, 2006) and Our New Husbands Are Here: Households, Gender, and Politics in a West African State from the Slave Trade to Colonial Rule (Ohio University Press, 2011). She won the Quantrell Award for Excellence in Undergraduate Teaching in 2016.

Osborn was “so delighted” to have the chance to take UChicago students to Senegal: “Even if they do not embark on a future career that involves Africa, I think that studying abroad in West Africa imparts significant lifelong lessons.” Senegal is a country of “rich cultural traditions,” she says. It’s known for its music, food, and beautiful handmade clothing, as well as “a language, Wolof, whose usage and conversational forms serve to reinforce important social prerogatives.”

Although the country faces difficult challenges, “to judge Senegal simply by its economic indicators would overlook the depth and richness of its culture and society, as well as its values and sources of pride,” she says. “Those are the dynamics that students learn by moving through the city and studying its history and culture sur place.”