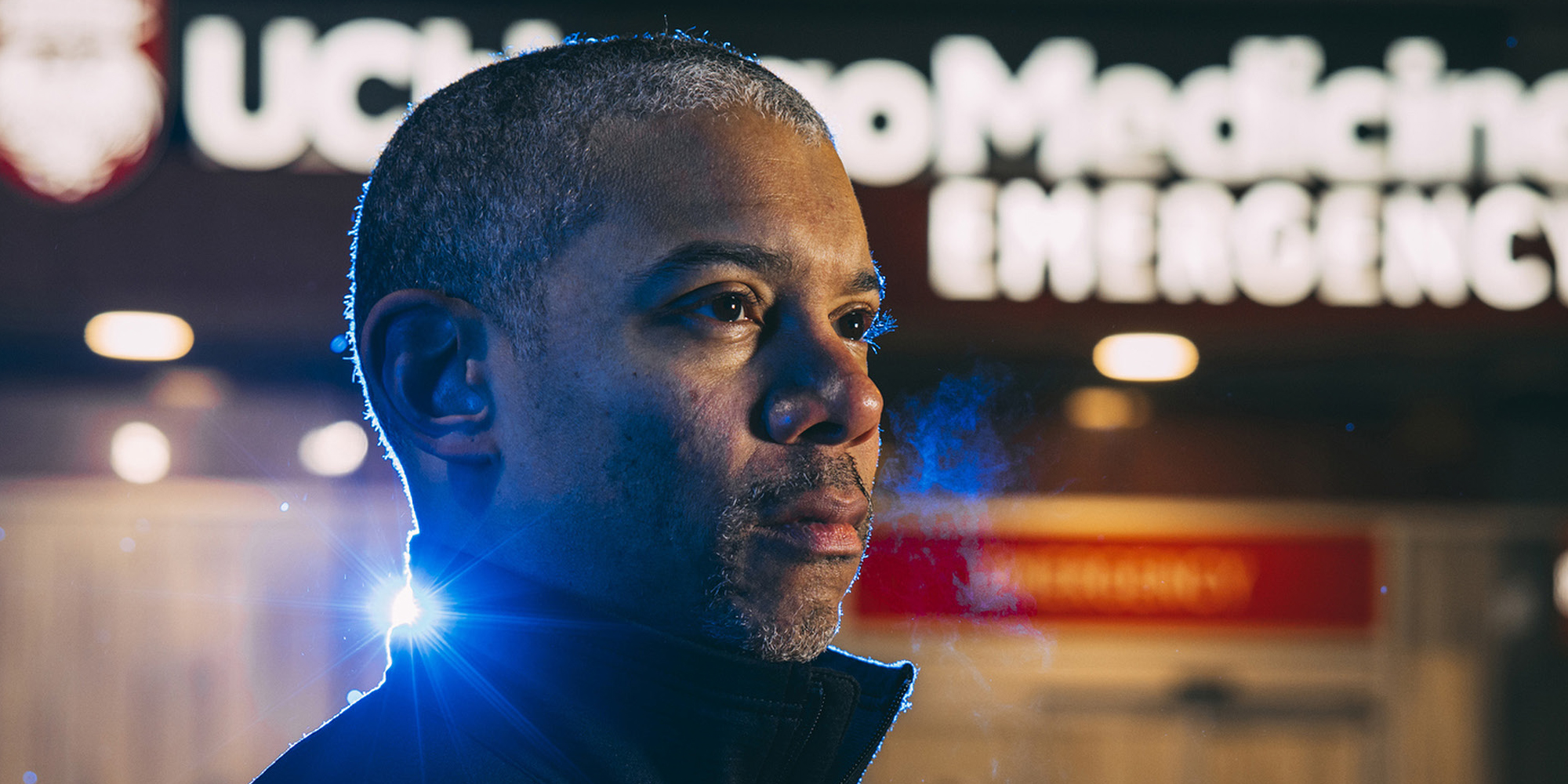 A first-time author, Thomas Fisher, MD’01, says the process of writing The Emergency allowed him to understand his experiences as a doctor in a new way. “If you take away the idea that there are villains and saviors,” he says, “what do you see?” (Photography by Clayton Hauck)

When Thomas Fisher, MD’01, started work on what would become The Emergency: A Year of Healing and Heartbreak in a Chicago ER (One World, 2022), the COVID-19 pandemic was still months away. Fisher, an emergency physician at UChicago Medicine, had intended to write a book about racial disparities in health and health care, neglect of Black communities, and the failures of the American health care system—never imagining that a once-in-a-century crisis would so suddenly and painfully illustrate his point.

The Emergency, which follows Fisher through the tumult of 2020 and 2021, takes many forms: memoir, policy analysis, manifesto. Some chapters recount daily life in the emergency room, both before and during the pandemic, where patients often wait hours to get just minutes of his time. Others recall his South Side upbringing. Several take the form of letters to his patients, explaining why he and the health care system failed to alleviate their suffering. “Certainly I use COVID as an important example,” Fisher says, but “this is really about something bigger than COVID.”

This interview, conducted in early June, has been edited and condensed.

What does the title The Emergency mean to you?

The emergency is a waiting room that’s 40 people deep and has few solutions for those who need the most help. The emergency is people whose bodies are used as part of the production function and left ill. The emergency is COVID. The pandemic, in short order, reflected the way in which society protects some and leaves others exposed. Segregation and other stratifications of our society often take 30 or 40 years to be reflected in the bodies of those who are being exploited. COVID did that in weeks.

Your book spans multiple genres. How did you think about its ambitions as you were writing?

I have been practicing medicine and trying to work on the health care system for 20 years. The book began as an opportunity to consolidate what I’ve learned over the arc of that time and ask how those learnings have been reflected in the bodies and experiences of the patients that I take care of on the South Side of Chicago.

The memoir component is actually a side effect. I wanted the book to be intimate enough that a reader would see themselves in the patients—who may seem from the outside to be very different from them—and also in the nurses, pharmacists, and doctors. I was the guide through this.

But at the end of the day, the book is neither about me nor the University of Chicago. The book is about America and a society that creates winners and losers, and how losers often pay with their health.

The Emergency is your first book. Were you always interested in writing?

When I started my career, I did a brief tour of academic writing. It’s a very different way of approaching communication. I began journaling a few years ago, which was largely cathartic and helped me process what I was seeing and experiencing. That fed into the work here. But in many ways, I learned to do this as I did it.

The book includes long and sometimes personal letters to your patients. Tell me about those.

My editor said, “Don’t make it boring. Don’t wonk. This is about communicating to a chosen audience.” So I chose my patients—people who are often trapped by these structures and don’t fully comprehend the broader picture that I’ve had a glimpse into.

At first the letters were a way to talk about why society is structured the way it is and why hospitals are shaped the way they are—it was an effort to focus what can be huge and boggy into something more taut. But then it became, what do I wish I could say to my patients if I had more time, or if we could sit down over coffee at another point in our lives?

I think that the truth matters, and the truth is, my colleagues and I are humans who are doing the best we can, but we never know everything. What we’ve learned in medical school is very straightforward, but the emergency department is very complex. We’re doing the best we can, and sometimes we make mistakes or fail or feel confused or unsure. That’s something I hope resonates with readers, and readers who are physicians in particular.

It must be hard to take that doubt home with you.

I’ve dealt with it in different ways over the arc of my career. That’s partially where the journaling began.

But our society treats doubt as weakness, and I kind of want to push against that. There’s strength in being willing to sit with uncertainty and unflinchingly look at the truth, even when it’s hard.

How does the emergency department feel right now?

I was just there yesterday. We are busy. Our hospital is full. And some of the challenges that we’re facing feel like prepandemic challenges. The statistics are clear: in Chicago, we have a fair amount of COVID circulating, but we’re not seeing a whole lot of it in the emergency department. It is not normal—it is not 2018 all over again. But it is definitely not 2020 at all. 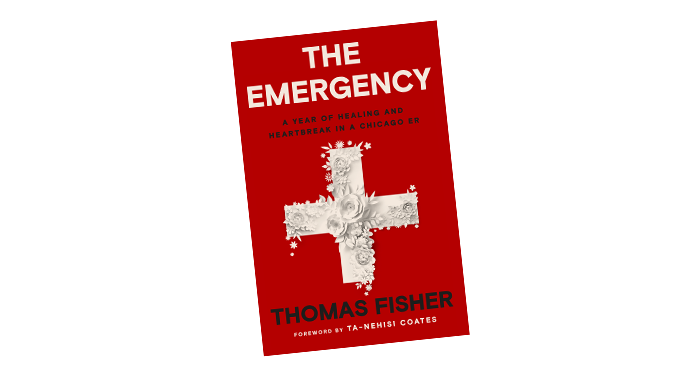 In the book, you describe a fascinating period in 2020 when the emergency department was less crowded than usual because of COVID. What was that like?

There was this moment when the entire health care system was aligned to tackle a single problem: managing the pandemic. And when everything is aligned, there are no internal conflicts or competition for resources. Things worked so smoothly.

When you combine that with a lower volume of patients, because folks were sheltering at home rather than seeing us about what might have been important issues, it created this kind of bizarre efficiency in the quiet moment between waves in 2020.

You also write about heightened moments, like when a code is called, when everyone in the ER seems to be working in perfect harmony. How does it feel to be part of that?

Man, that kind of flow—it’s an extreme experience of being in the moment and present. You don’t have to think. Training that you forgot you even learned comes to bear all at once. I mean, do you think about riding a bike when you’re riding? And sometimes it’s a feeling of awe, like, oh, this is pretty amazing when it works well.

You’ve worked for an insurance company and for a managed care organization. What did those experiences teach you?

It led me to understand that none of us are above the systems that we work in. There are no heroes here. The notion that if we get the right CEO, the right president, the right leader, everything will be fixed—it’s a fallacy. Even the best people with the best of intentions struggle against old cultures and institutions that are built to function a certain way and have a century of momentum.

So the range of what is possible is often quite small, even as the vocabulary around what’s possible expands. What that often argues for is building brand-new things.

What kinds of new things do you imagine?

Let me give you a beautiful and imperfect example. Black Lives Matter emerged after Ferguson. It was this group of folks who were saying, our current civil rights organizations are not prepared to address the issues of today. They were ridiculed and mocked.

Now, I don’t even need to describe the challenges that they face as an organization. But the point is, they said, here’s a problem, let’s fix it. Let’s describe it in a new way. Let’s point out a truth. Let’s build something new.

You sign each of the letters to your patients with “onward.” What does that word mean to you?

I’ve been signing emails that way for a very long time. It means, let’s not be stagnant. Here’s where we are, and what we’ve learned, and what we’re doing. So what’s next? Let’s go forward.