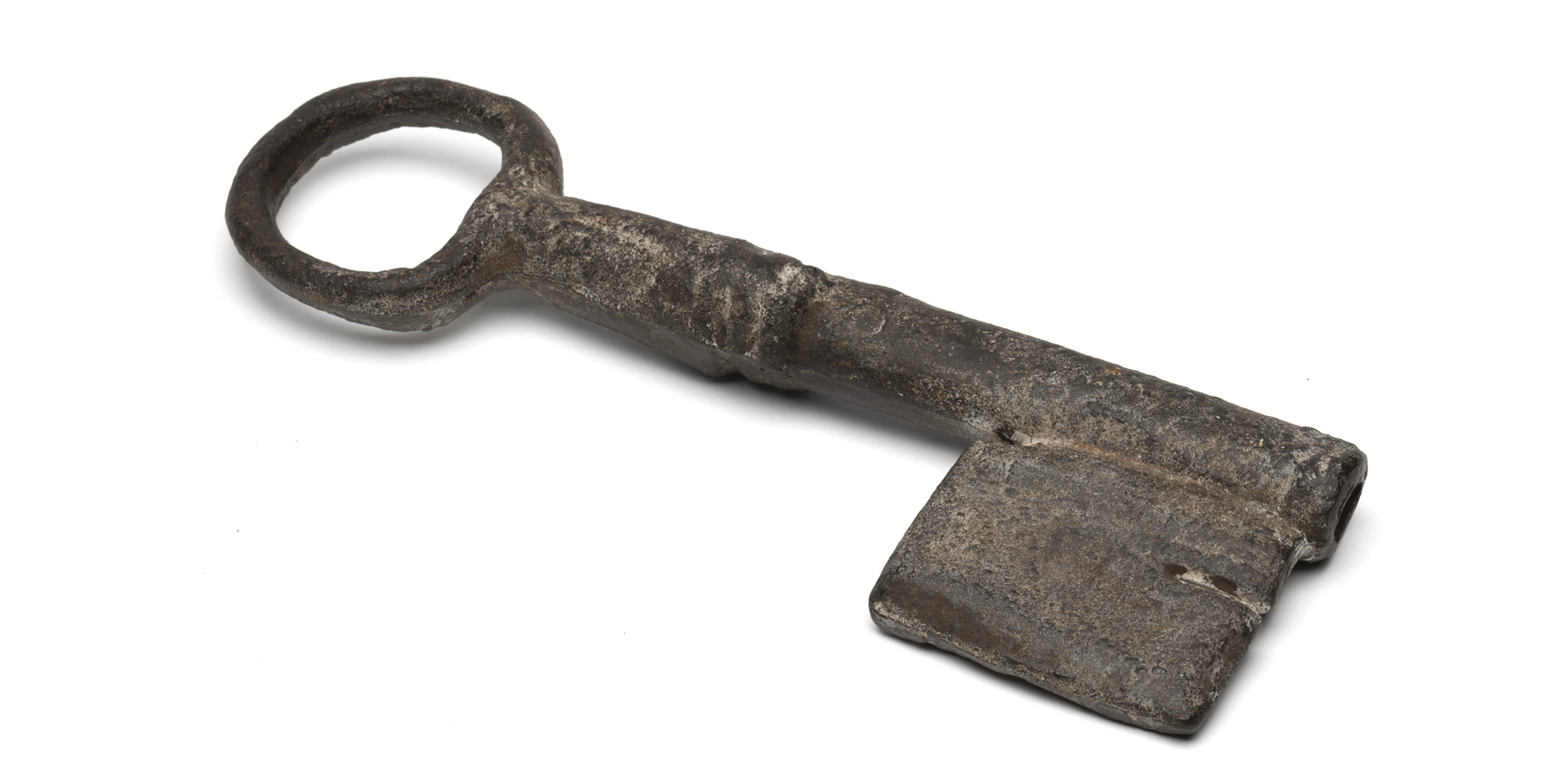 This 28-pound cast-iron key is part of the William Beaumont Collection in the Special Collections Research Center. (All photography by Nathan Keay)

Among the rare books and manuscripts in the Regenstein lurk other amazing artifacts.

The Special Collections Research Center might seem rarefied and intimidating, but in reality? You can simply walk through the department’s glass doors and talk to the staff. They want UChicagoans to know that the rare books, manuscripts, and archives held there are open to all. If you’d like to get a peek at a 14th-century illuminated manuscript or pore over documents from the first self-sustaining nuclear chain reaction, you can—just leave your ink and drinks outside the reading rooms.

What’s so special about this corner of the library, found on the first floor of Regenstein? More than you can imagine. But first, a little history.

The University of Chicago Library’s story began with that of the University, as one of the five general divisions created by William Rainey Harper. When doors opened to students in October 1892, the library was located in a hastily erected temporary building, which also housed the student gymnasium and the University press. The collection consisted of about 50,000 volumes from the Old University of Chicago and the Baptist Union Theological Seminary, as well as almost 100,000 books and manuscripts from what became known as the Berlin Collection, making it one of the largest university libraries in the country.

Among that collection were rare books and manuscripts, but it wasn’t until 1953 that Special Collections as a distinct department was formally created. Robert Rosenthal, AM’55, its first curator, held the position until his death in 1989, leaving a legacy of an active and engaged department that supports the scholarship of the University. Students, faculty, staff, and non-University-affiliated researchers are welcome to visit and peruse whatever piques their interests.

The collections encompass 67,000 linear feet (12 miles) of manuscripts and University archives, 345,000 rare books, 1,456 online collection guides, and about 85,000 gigabytes of digital materials. The staff assists thousands of researchers each year, in person and remotely.

The history of science and medicine is a particular strength, recording the work of giants—manuscripts of Sir Isaac Newton and letters Albert Einstein wrote to mathematician Walther Mayer. In the humanities, there are the records of Poetry magazine and its founder, Harriet Monroe; the printed works of Frédéric Chopin; and the Chicago Jazz Archive. Scholars can review the papers of astrophysicist Subrahmanyan Chandrasekhar, browse the digitized Goodspeed Manuscript Collection, or dive into the history of the Chicago school of sociology.

Less well known is the treasure trove of artifacts—often acquired as part of a collection—that lies in the department’s stacks, items as tantalizing as they are unexpected. You could start a band, outfit a dance troupe, or have a pickup football game—at least in your imagination. As the name states, these items are special indeed 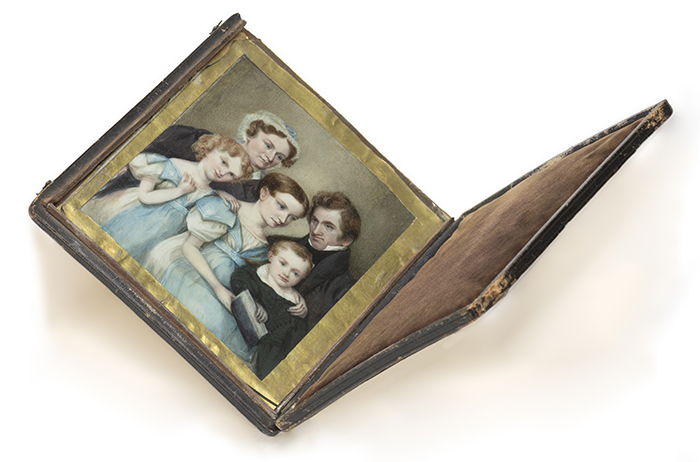 The cast-iron key to Fort Mackinac (top of the page) and this framed portrait miniature of William Beaumont and Deborah Greene Beaumont with their children, Israel Green Beaumont, Sarah Beaumont, and Lucretia Beaumont, circa 1833, are part of the William Beaumont Collection. It’s unknown if the key—weighing in at almost 28 pounds—was functional or commemorative. The fort, just off the northern edge of Michigan in Lake Huron, was alternately controlled by the British and Americans from 1780 to 1815. As a US Army surgeon from 1819 to 1826, Beaumont treated French Canadian fur trapper Alexis St. Martin for a gunshot wound to the stomach. Beaumont’s subsequent (and ethically questionable) studies of St. Martin led to new knowledge of how the digestive system functions. 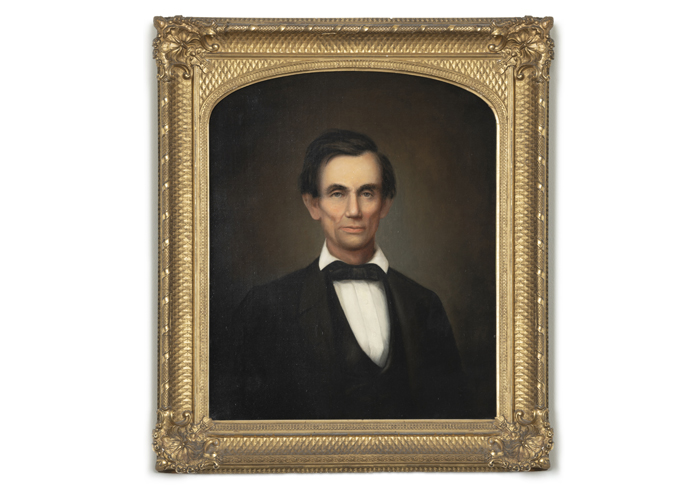 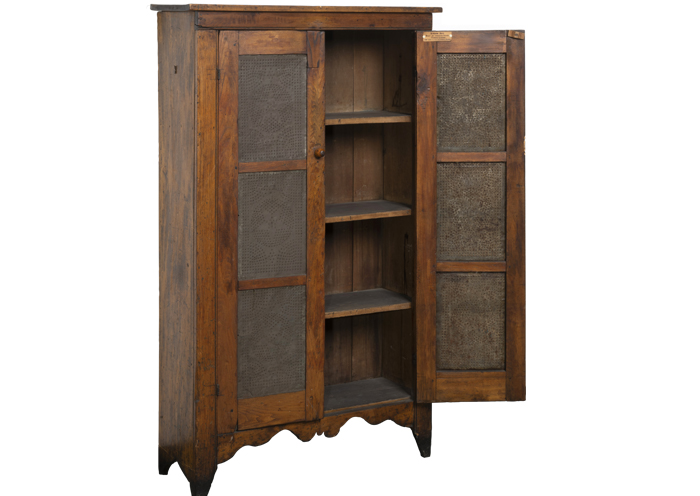 A clean-shaven Abraham Lincoln keeps watch over this sturdy pie safe built by his father. The cabinet, with ventilated tin panels at the front to allow baked goods to cool while protecting them from pests, was a fixture in the Lincoln log cabin in Coles County, Illinois, until Nancy A. Hall, great-granddaughter of Lincoln’s stepmother, Sarah Bush Lincoln, sold it to Rev. William Eleazar Barton, a noted Lincoln historian and collector, in 1892. Barton’s collection was acquired by the University in 1932 at the urging of history professor William E. Dodd. The portrait, by George Frederick Wright, was painted shortly after Lincoln’s nomination for the presidency and purchased by the candidate as a gift for longtime friend and supporter William Butler. For many years the portrait and other Lincolniana were displayed in Harper Memorial Library. 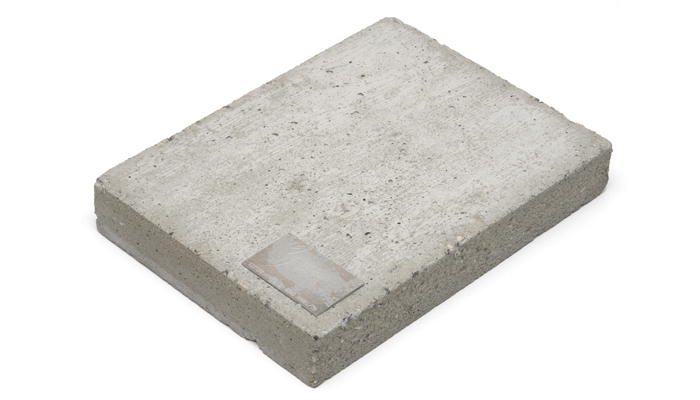 Wolf Vostell’s Concrete Traffic (1970) made news when it was restored and installed at the Campus North parking garage in 2016. But the 1957 Cadillac inside that sculpture wasn’t the only thing Vostell, part of the Fluxus experimental art collective, encased in concrete. His 1971 Betonbuch (Concrete Book) weighs almost 20 pounds and is number 83 of 100 concrete-covered copies of his book Betonierungen (Concretifications). Special Collections has the more reader-friendly format too. 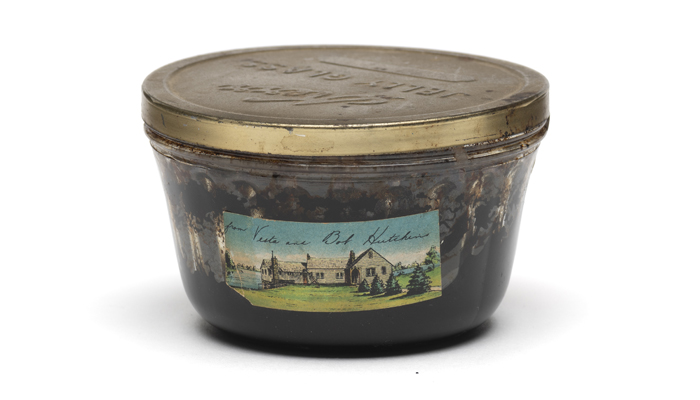 This jar of homemade berry jam, circa 1950, labeled “from Vesta and Bob Hutchins,” was made by Robert Maynard Hutchins’s second wife. (Although given credit for the gift, it’s unlikely the busy chancellor was a participant in the jam making.) The fruit was grown at the couple’s country retreat in Mundelein, Illinois. 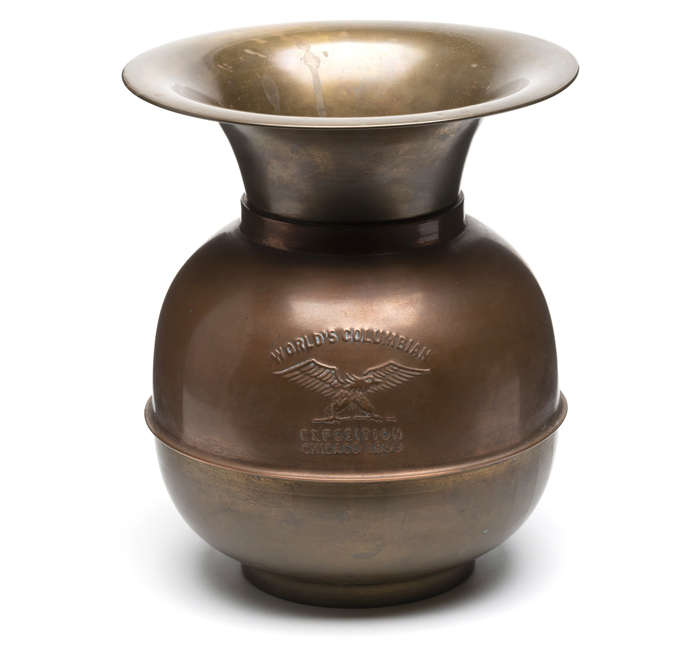 Hygiene-minded visitors to the 1893 World’s Columbian Exposition could take home a brass spittoon as a souvenir of their visit to the White City. This particular item was donated by longtime philosophy professor Ian Mueller, an avid collector of souvenirs and memorabilia of the University, the city of Chicago, and the two World’s Fairs held in the city. 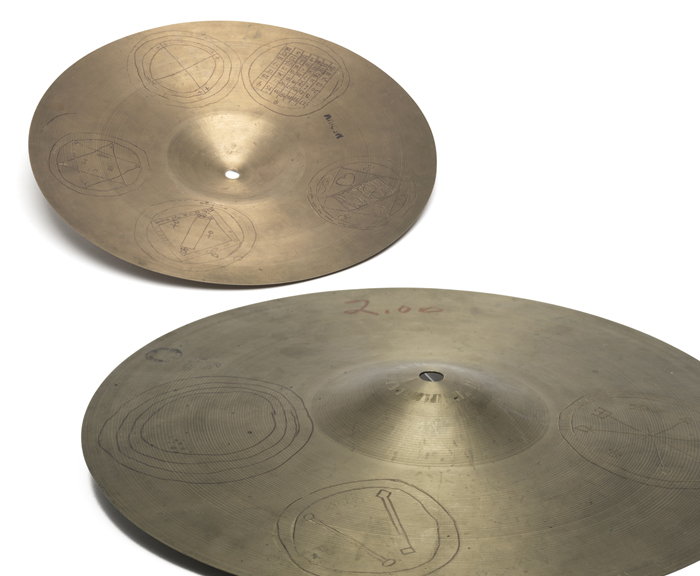 Inscribed on both sides with numerology symbols, this celestial cymbal was used by Sun Ra and his Arkestra. Other instruments in the collection, donated by Alton Abraham, Sun Ra’s longtime friend and business associate, include a homemade harp and a “planisphere instrument.” Special Collections also houses the extensive Chicago Jazz Archive, which documents more than eight decades of music history. 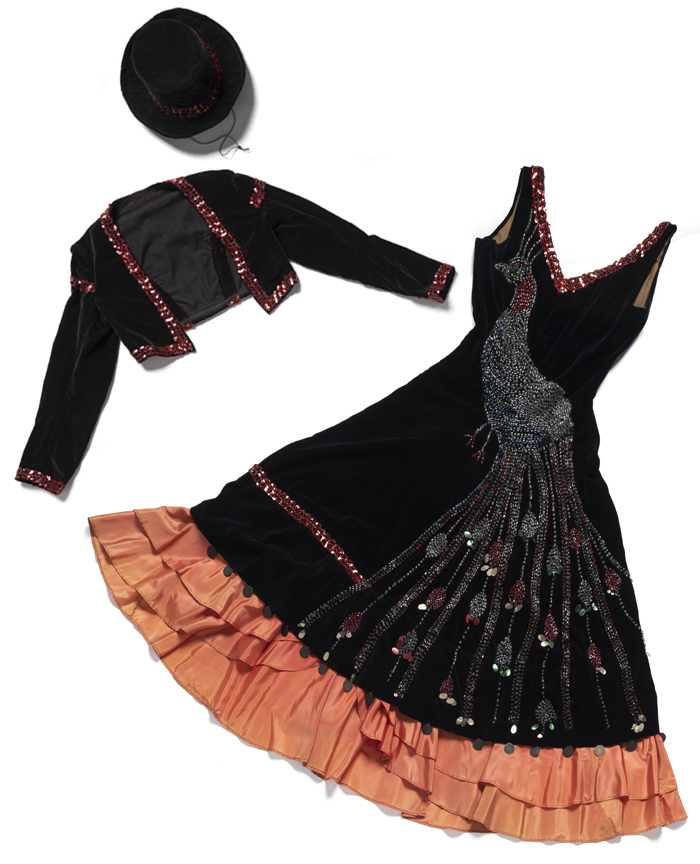 This velvet flamenco dress ensemble, circa 1940, with a hand-beaded peacock design, was worn by Marjorie Whitney Prass, AA’37, AB’41. An accomplished musician and dancer, Prass performed in the University’s Mirror Review, an annual women’s dance revue begun in response to the all-male Blackfriars musical comedy troupe. Her collection contains more than 200 costume pieces, including clothing, accessories, and props, most made by Prass and her mother. 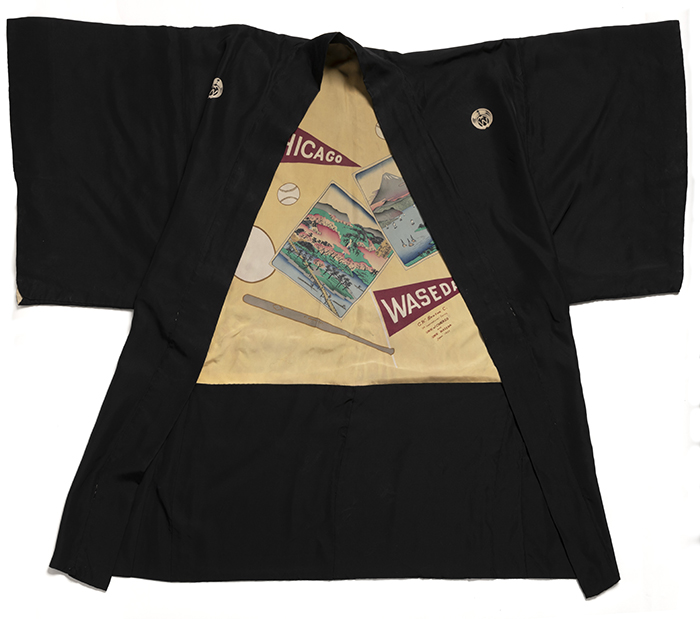 This hand-painted silk kimono was a gift from Japan’s Waseda University to the University in honor of the 1925 exhibition baseball game between the two universities. The interior is embellished with images of Japan, a ball, a glove, and a bat, as well as pennants of the two schools. 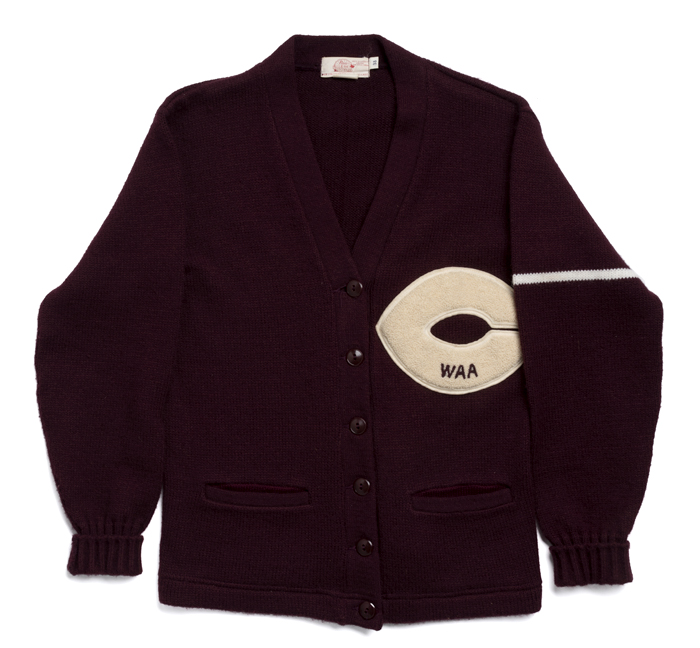 In 1922 women student-athletes kept warm in sweaters featuring the Chicago “C” inscribed with the initials of the Women’s Athletic Association—the nation’s longest running women’s collegiate athletics organization. Although intercollegiate competition in women’s sports wasn’t permitted until the 1960s, the WAA held unofficial “play days” on the Midway during the 1920s. 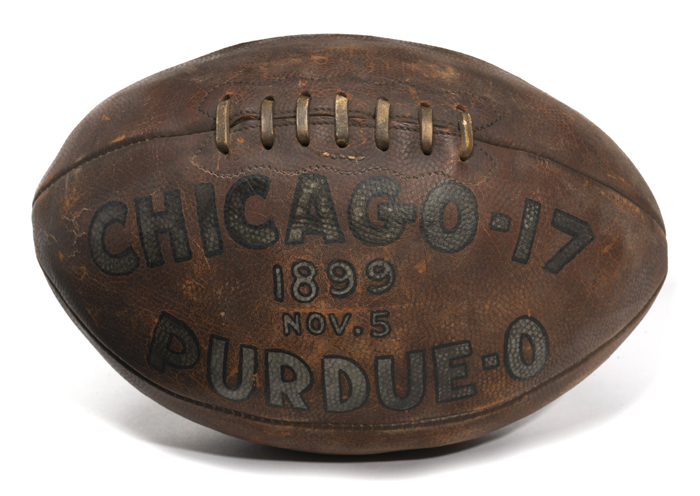 The original Monsters of the Midway left behind quite a collection of footballs. Amos Alonzo Stagg coached the team to seven Big Ten championships between 1899 and 1924. According to the record books, Chicago beat rival Purdue 17–0 on November 5, 1898—a year earlier than this 100-year-old pigskin indicates. But 1899 was also a winner: Chicago defeated Purdue by a whopping 44–0 on November 4. The reason for the discrepancy is lost to time. 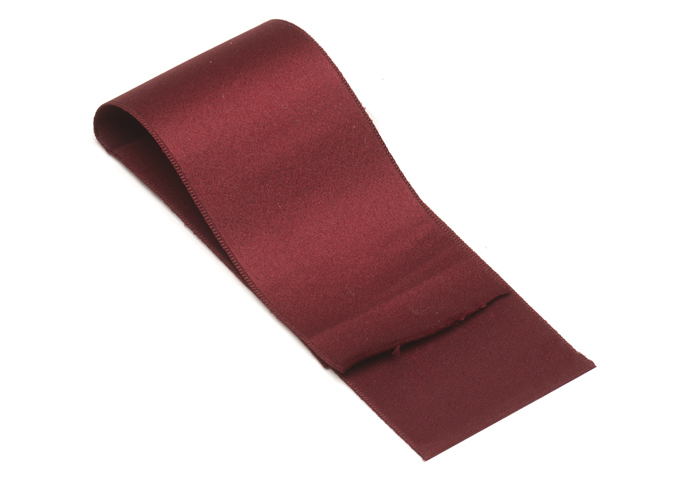 The University’s first attempt to choose school colors ended in a hue and cry. Trustees officially adopted orange in 1892, upsetting Syracuse University, which had claimed the color two years prior, and students, who were using various shades of gold. During meetings to discuss the issue, two camps formed: one for scarlet and one for maroon. Dean of women Marion Talbot took her recommendation to the trustees, and maroon became the official color in 1894. This small bit of ribbon was used in the deliberations. 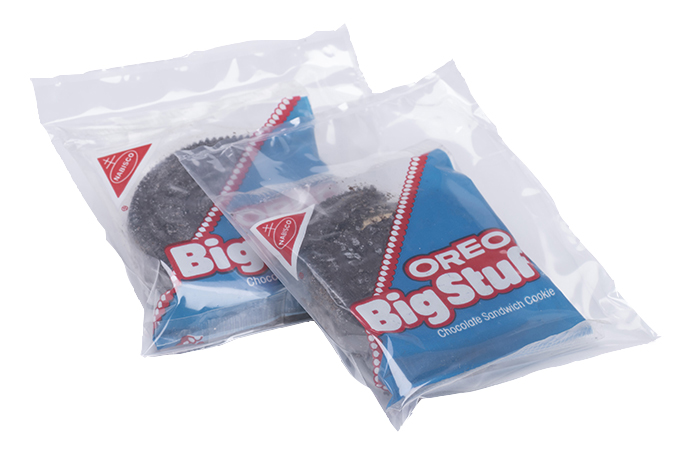 The largest manuscript collection in the Special Collections Research Center is the corporate archive of R. R. Donnelley, which includes more than 140 years of the companyʼs history, including two packages of the short-lived Oreo Big Stuf. The jumbo chocolate sandwich cookies were sent Persian Gulf troops in the 1990s by Donnelly and its subsidiary Metromail. 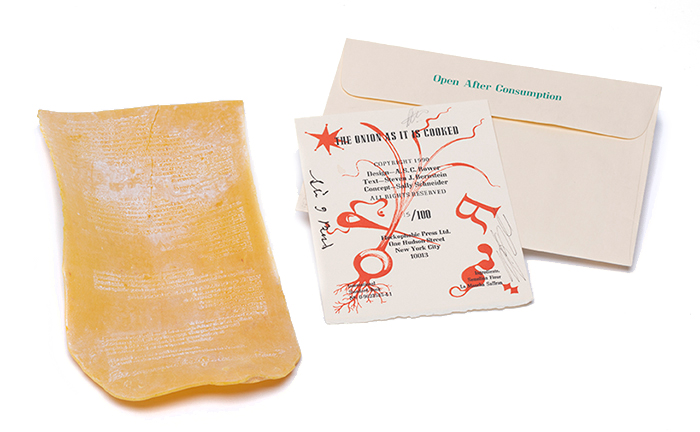 This edible book is The Onion as It Is Cooked (Flockophobic Press, 1990) by Steven J. Bernstein, Sally Schneider, and A. S. C. Rower. The single sheet of saffron pasta is imprinted with a poem. Special Collections holds number 15 of the 100 signed copies printed.