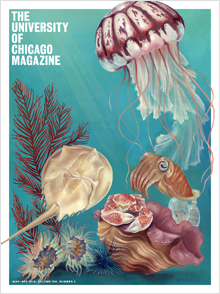 Entrepreneurs meeting the demand for raw materials, not environmental virtue, drives the expansion of the recycling industry. Plus—Trash talker: Author Adam Minter, AB’93, weighs in on the wide world of waste.

John Snyder traversed Ethiopia seeking inspiration for a screenplay. Instead he captured a landscape about to disappear.

The sounds of March.

Readers react to the previous issue’s cover image (with a bullseye), raise matters of race and scholarly evidence, pine for Milton Friedman’s influence in response to the financial crisis, rev their critical engines over advertising, and more.

A laboratory for humanists

After more than three decades at Britannica, editor in chief Dale Hoiberg, AM’74, PhD’93, knows the encyclopedia business inside out.

American Hustle and me

The things they carried back

A campus festival explores the influence of Chinese opera.

Plus-size model Amanda Tice, AB’06, believes her work can have a positive effect on women’s lives.

Leon and Amy Kass develop an online curriculum that inspires insight into the national soul.

An interpreter in residence holds “office hours” for visitors to the Smart Museum of Art.

Researchers show that quality of sleep has a profound effect on cancer growth rates.

Interview: Call of the wild

A program to reduce the financial and psychological obstacles to the college application process makes an impact in its first year.

Gift to UEI helps low-income students prepare for college, diverse accomplishments recognized, UChicago Medicine’s cancer research receives an infusion of funds, India honors prolific scholars, Zimmer supports the South Side as the site for the Obama library, and the Center in Delhi names an executive director.

The 2014 alumni award recipients have made their mark on the University, their field, or their cause. The University of Chicago Alumni Association will recognize them at a ceremony in Rockefeller Chapel during this June’s Alumni Weekend.