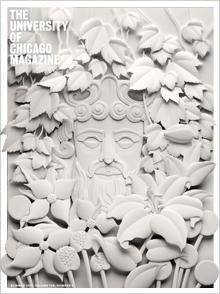 (Noun, an author or editor of a dictionary)

NASA’s Parker Solar Probe gets ready to meet a star.

Jeff Deutsch has a plan to save the Seminary Co-op.

From his first trip north as the youngest hand on a two-masted schooner, anthropologist Ernest “Tiger” Burch Jr., AM’63, PhD’66, was driven to learn about the Arctic and its peoples.

Reviving the spirit of the University of Chicago Round Table of the Air.

Readers remember the cultural influence of historian Henry Steele Commager, PhB’23, AM’24, PhD’28; recall a flu-ridden arrival on campus; weigh in on language instruction; and more.

The Office of the Provost at UChicago

Daniel Deirmeier offers an inside look at the activities and responsibilities of the Office of the Provost.

Five scholars discuss how the looting of antiquities puts our cultural heritage in peril, and what to do about it.

With the support of a $100 million gift, UChicago Medicine is pioneering a new science of wellness.

What listening to icebergs tells us about the future of the Antarctic.

Denise Shull, AM’95, helps Wall Streeters get in touch with their softer sides.

The writers and artists in Deborah Nelson’s new book believe a world of suffering calls for a dispassionate eye.

A surprising way to jump-start a sluggish economy.

A celiac breakthrough; the secrets of cephalopods; a double standard for female financial advisers; change your password.

Tying the knot at UChicago, by the numbers.

Add a little life of the mind to your iMessage conversations.

Simon and Virginia Aronson have been reading minds as a team for 40 years.

Twins Laurie and Lynne Butler—one a UChicago chemistry professor, the other a double alumna—discuss math, horses, and a college boyfriend who never got them confused.

Thoughts on academia, football, and that painting.

How to run for office

Questions for the Muslim Students Association

On praying in the stacks, when Ramadan and finals week coincide, and Muslim fashion.

Scav Hunt items worth the most points in 2017

NSP at 40: Please show your work

Clichés I have known and loved

A lexicographer’s favorite clichés (before he grew to hate them).

Chicken hawks on the quad.